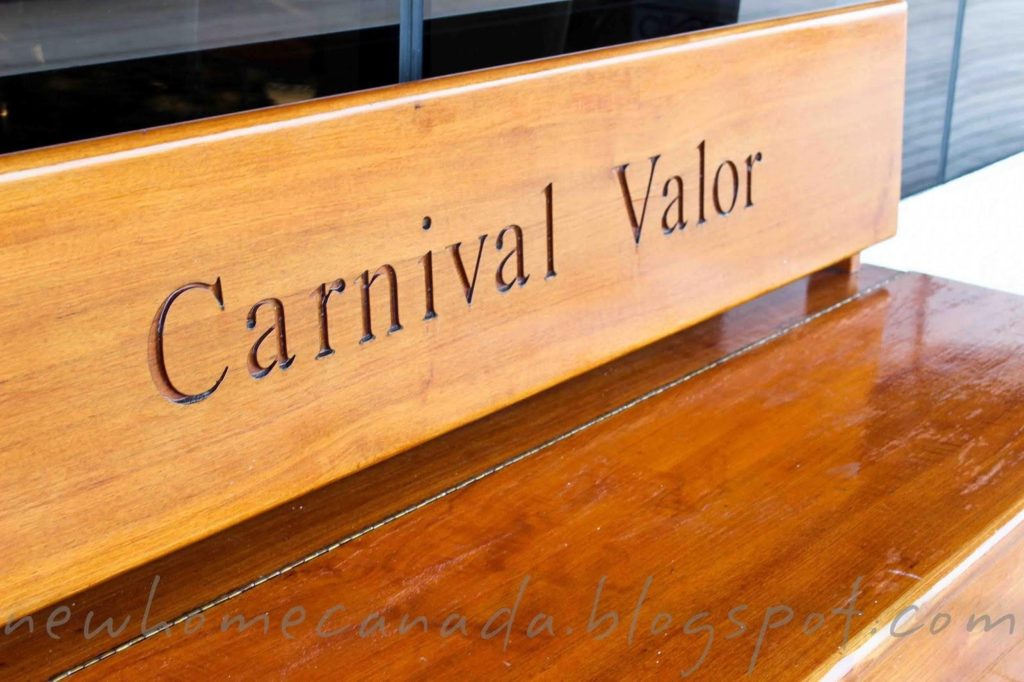 *For those who missed the first posts of this trip: Here and Here

That was my first time on a cruise ship. Well, it’s better to call it the city, because the business is big. All right, any cruise ship is big anyway, I just couldn’t assimilate how much.

Question you won’t shut up: ready for a flood of photos?

We sailed the Carnival Valor, more by the script than by the ship itself. But Valor did not fail to have good comments despite having started its services there 2004. It holds 2,974 passengers and over 1,180 crew and has the décor based on “Heroes and Heroism”, i.e. Heroes and Heroism, from various corners of the world (but everything was half blue, red and white – you know – American heroes had preference).

Right at the port in Puerto Rico, we go through the check-in procedures on the ship, we get our Sign&Sail card (on Carnival ships, you don’t use cash or personal cards, everything extra you spend accumulates on this card there, and in the end you close the bomb account) and we entered the ship through a long ramp. Our room was inside, so without windows and was located on the 6th deck (deck = floors – and had 12 in all).

Soon after, our luggage arrived in our quarters. Speaking of quarters, I thought the room was good in size for a ship. It’s right that I’m usually very undemanding (being clean for me is fine), but although compact, the room did not have that feeling of claustrophobia as I imagined it would have. There was even king size bed, look that wonder, and plenty of closet space, not to leave anything by the mess ed by the room (in theory, at least).

I think the option of just one day on the high seas (the others were on beaches) was an excellent option for us, because they did not have many activities available for children her age. There was a large area for children there on the 11th deck, full of activities, with monitors and everything, but only from 2 years (even with parents). On top of that, they did not allow the use of pool diapers in any of the various pools, nor in children’s pools. Alice is in the process of defralde and doing well, but we still do not risk leaving her without diaper outside the house. So we walked with her through various environments of the ship, not necessarily intended for children. Being can run and climb millions of steps for her is already good … 🙂

See the thousands of photos after the jump:

Points to note:
– The ship is mined from photographers, especially at night, near the dining venues. They have a whole paraphernalia and scenery and offer to take your picture. They also take pictures when you get on and off the ship every single day at fancy dinners, in the corridors of deck 5 and in the lobby. They are all exposed for appreciation, but if you want to take them, you have to buy them, obviously (and it’s not cheap).

– Until you can’t feel much about the ship walking, he was only walking at 20 miles an hour at the most. We took a little remedinho for seasickness in the first days as a precaution and everything went well, no major problems.

– They offer lectures and various details for you to choose tours at the stopping points. You can even buy the tv tour of the room.

– There is an adult-only area called Serenity.

– The food on the ship, in general, was very good!!

– Alcoholic beverages and soft drinks are not included.

– The ship has an appointment to leave each port and if you haven’t come back, I’m just sorry, you stay!

Previous posts in this series:San Juan | Part I

Trip to Negril in Jamaica