Next on our list of projects was the entrance and powder room. Back in the end of last year, I found a good sale on porcelain tiles, in one of my many visits to the hardware store. So the project began, but not exactly. Lol
Well, after going to the process of removing and replacing tiles on the fireplace, we knew that a lot of work would be involved in this area, not just because of the square footage and cut's complexity, but also for the lack of time to actually do it.

We waited until February to finally decided we had to get some help if we wanted this done, sooner rather than later. I got a few quotes and ended up going with a contractor who was able to adjust his price a bit. We promised to do a bit of the work ourselves, like removing the toilet, vanity and quarter rounds (a part of the baseboard before hand to get to the price we wanted. I don't like to spend money on things that I know we could do, but there was a few extras like plumbing adjustments that we just couldn't do it. 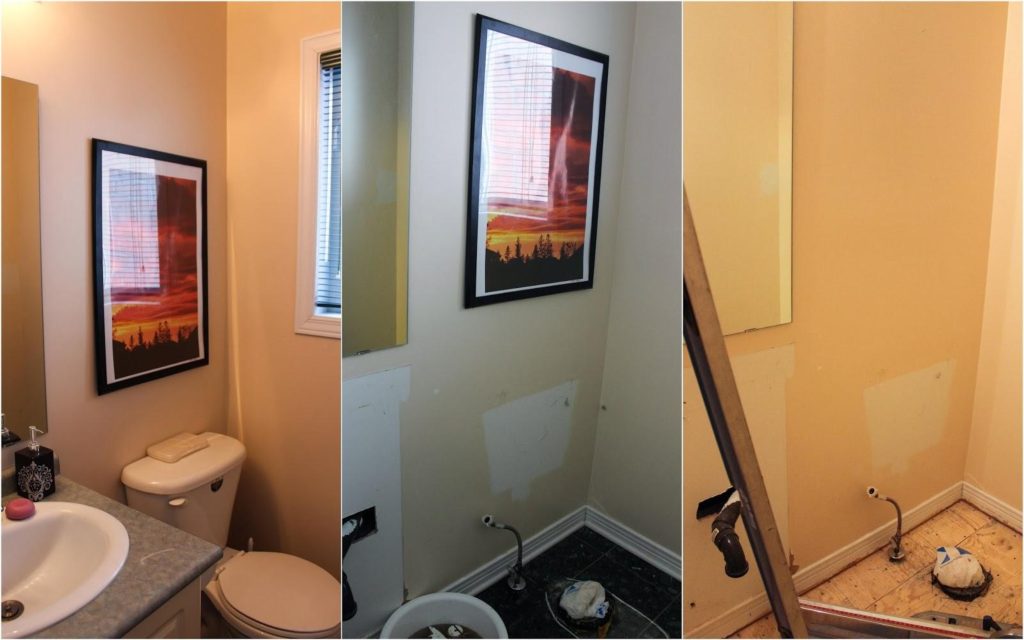 The process
1. The powder room before we started
2. The powder room after removal of toilet and vanity
3. The contractor team removed all tiles leaving the subfloor exposed
After the contractor finished the cutting and grouting the tiles, installation new vanity and toilet (we chose to go with a dual-flush option for water savings), we tackled the finishing touches, painting, cleaning and closet reconfiguration.
As we were preparing to paint the interior of the closet, we decided to replace the existing closet shelf and rod. It was not on the original plans, but only cost about $15. I decided to install the shoe cabinet inside the closet and use for mittens, winter hats and scarves. Go figure!
For the new vanity, I wanted something wall-mounted or in another words, a vanity that was lifted from the floor. For that reason, we had to move the water lines to the wall which were coming originally through the floor (that was the plumbing involved, basically). We chose a clean line and simple two-drawer vanity with a square-cut composite top. I'm preparing a product selection image for next post, stay tuned!
Thanks for reading! 🙂

6 furniture stores to start your new home in Germany

6 decor pieces to inspire you this season.