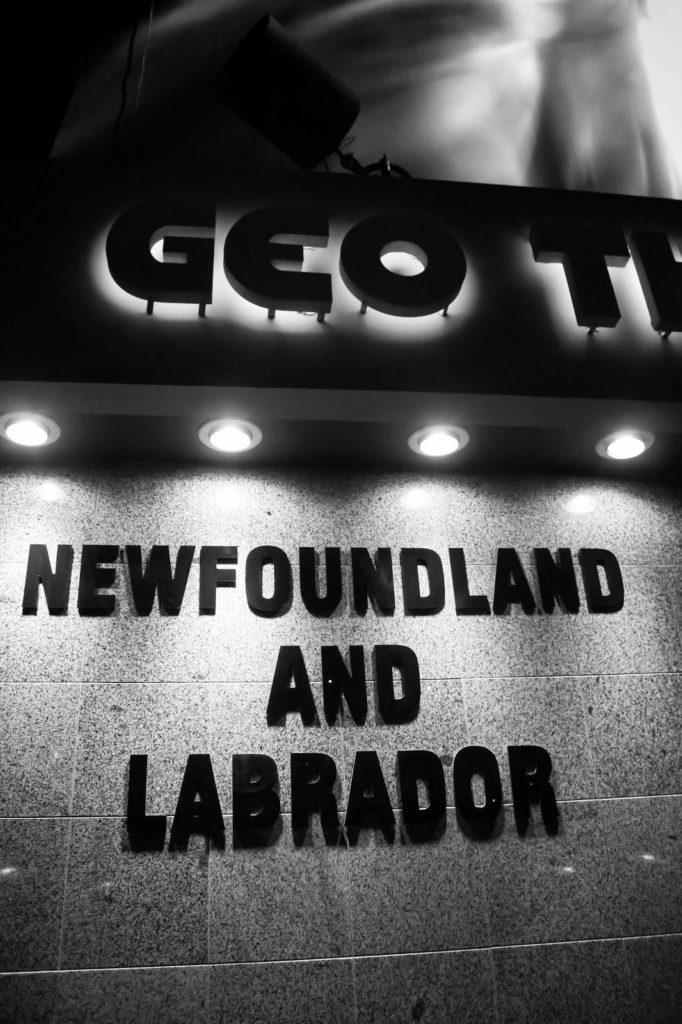 Another short trip came up and this time we decided to take the opportunity to know another Canadian province: Newfoundland and Labrador.

The province is further east in Canada and indeed all of North America. St. John’s, our destination, is the provincial capital with about 200,000 inhabitants and lies in the Newfoundland area, which is an island. The other part of the province, Labrador is gigantic and continental.
We had about 4 days there and it was more than enough to see the attractions in the city and still drive a little more to see beautiful landscapes along the coast (about 40 min around the city). The direct flight from Ottawa to St. John’s gives, on average, 2 hours and was very quiet (it’s much quieter to board domestic flights… rsrsrs).
Alice, who is already a little girl traveled since little lol, did not even take so much work on the trip (airport and flight), but it’s always good has a snack and a lollipop steam by hand that already facilitates even more. 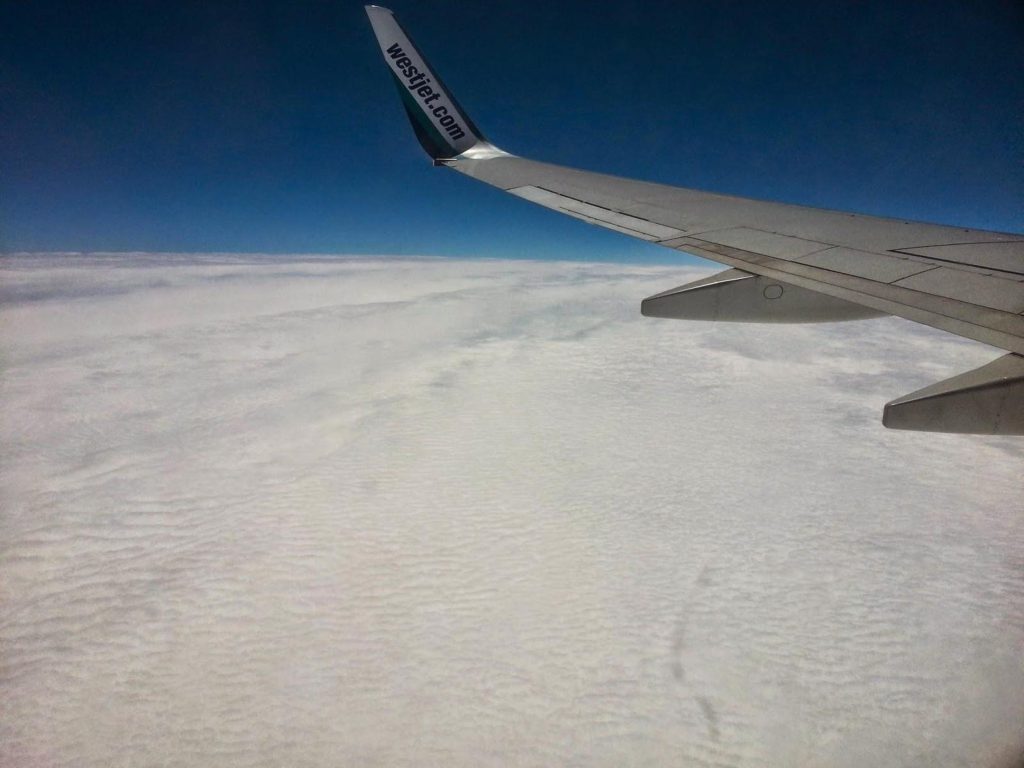 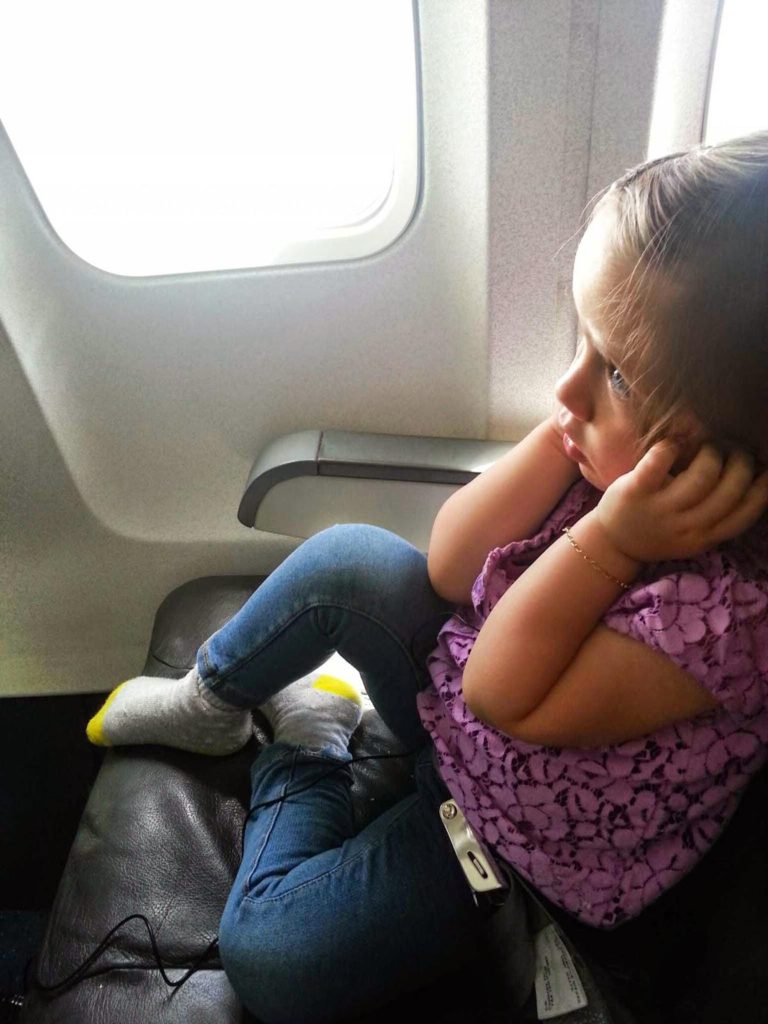 The first tourist spot of our itinerary was Signal Hill, a few miles from the city center. The fortifications of Signal Hill date back to the 17th century and served as a strategic point for various battles and today is one of Canada’s historic sites. You don’t pay anything to visit the place and it’s worth going back there if the day you go is too foggy.
Speaking of fog, St. John’s is a city of plenty of fog, wind and median temperatures. During these 4 days we were there, only in the last we could see well the landscapes and the ocean further inside. The natives of the region say that there are days that you can only get a gap of minutes to see further, other days or that. The temperature did not rise much either, it was on average 15 degrees (in the middle of summer), plus the action of wind and fog. We’ve heard it may even snow in June, which leaves newfoundland residents just two months into the “heat” year itself. Courage!
Despite a bit of fog on this first visit, we could see one of the icebergs floated under the Atlantic Ocean. They say they travel for years until they arrive on the coast of the province. They usually detach from arctic glacial plates and arrive only with a small percentage of their original potential size. Still, it was beautiful to see! 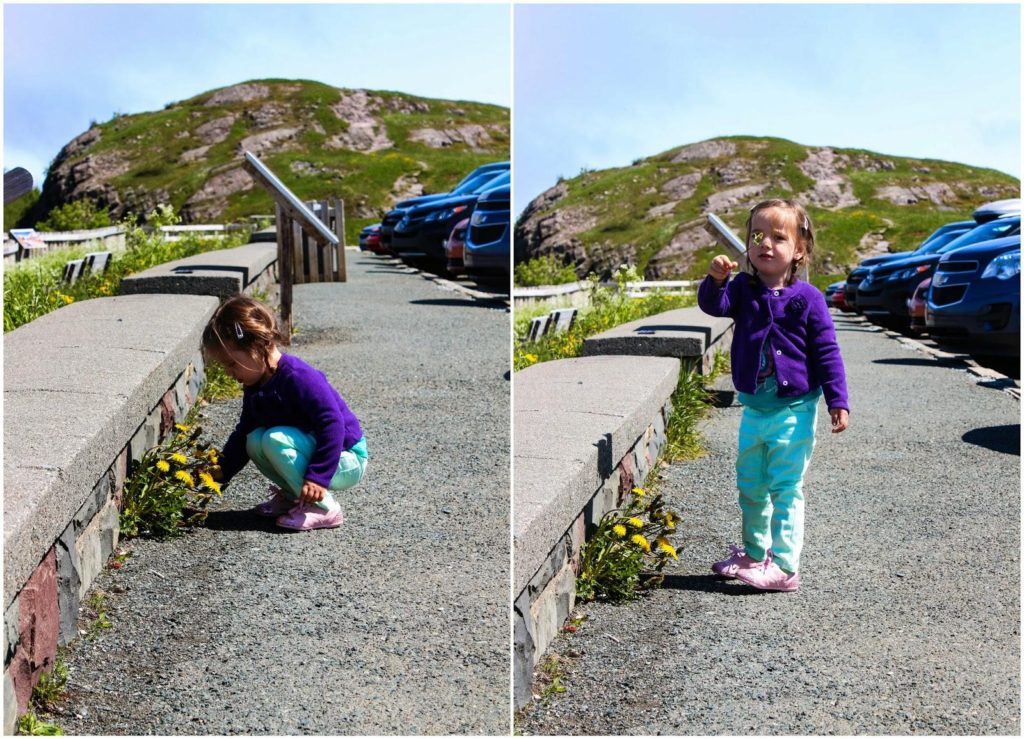 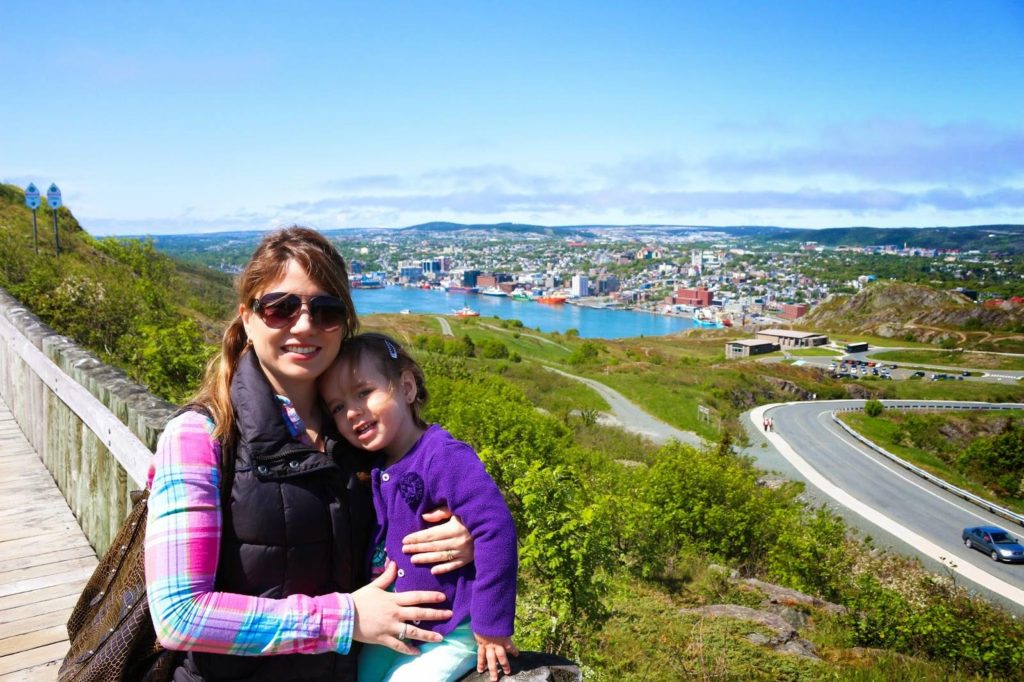 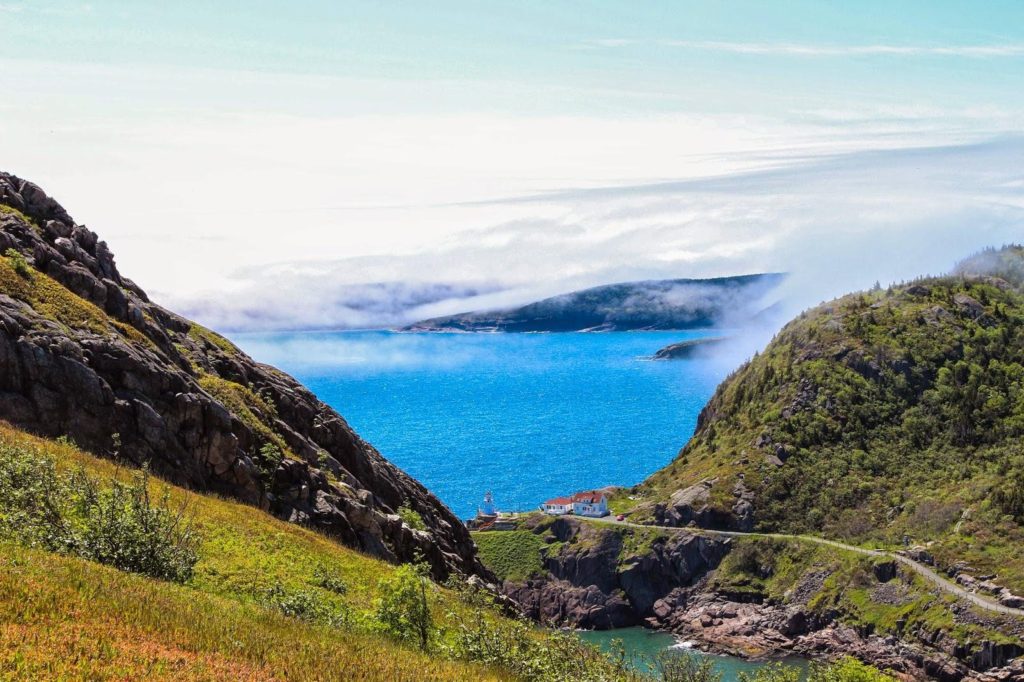 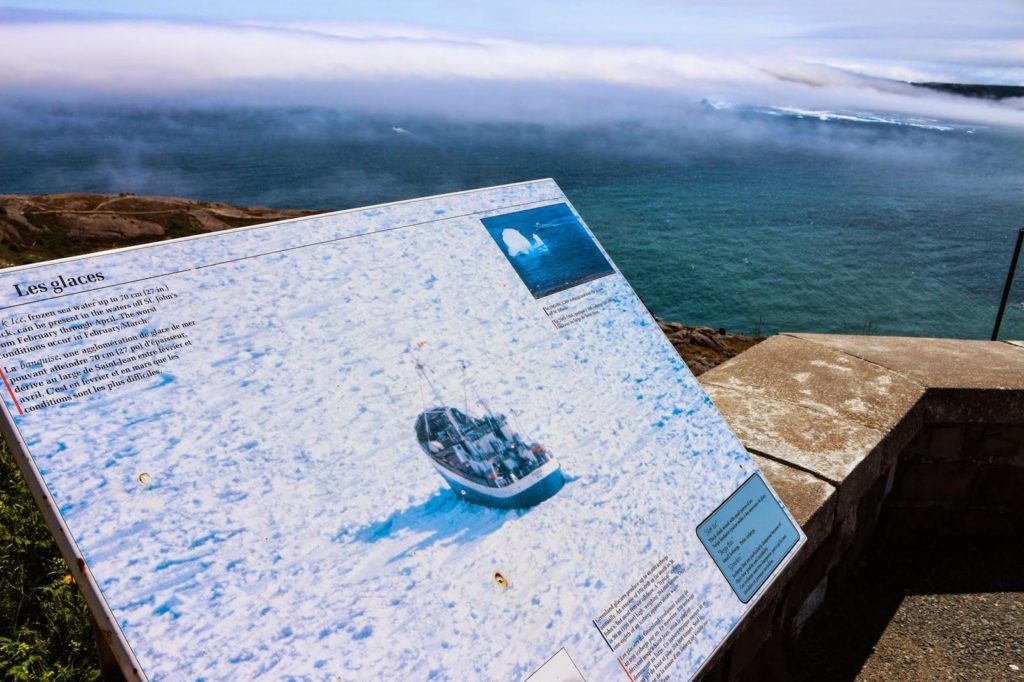 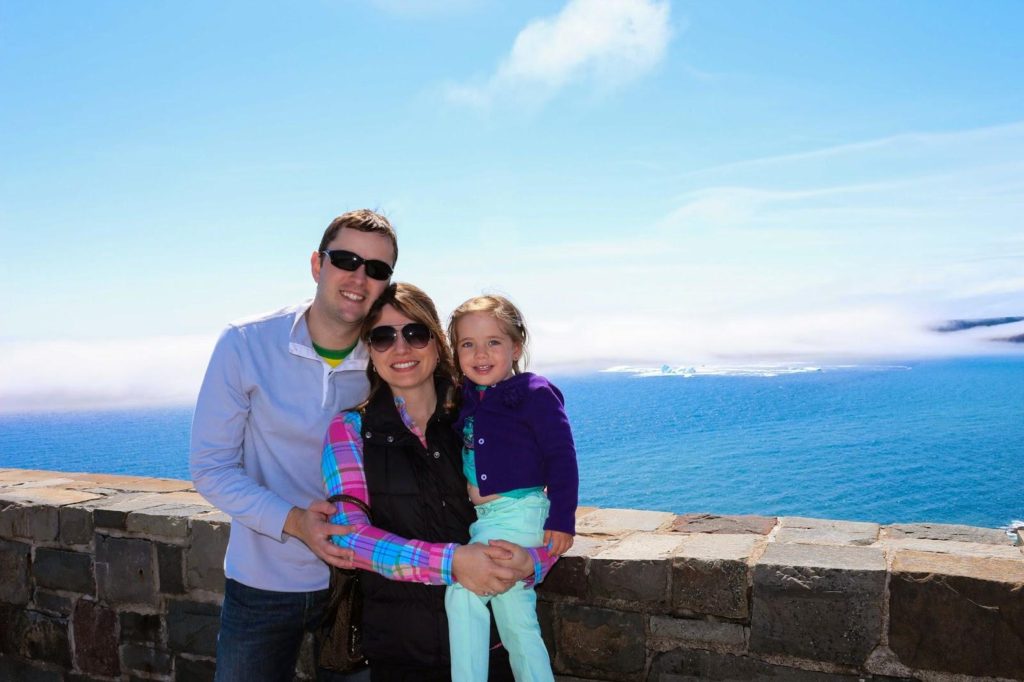 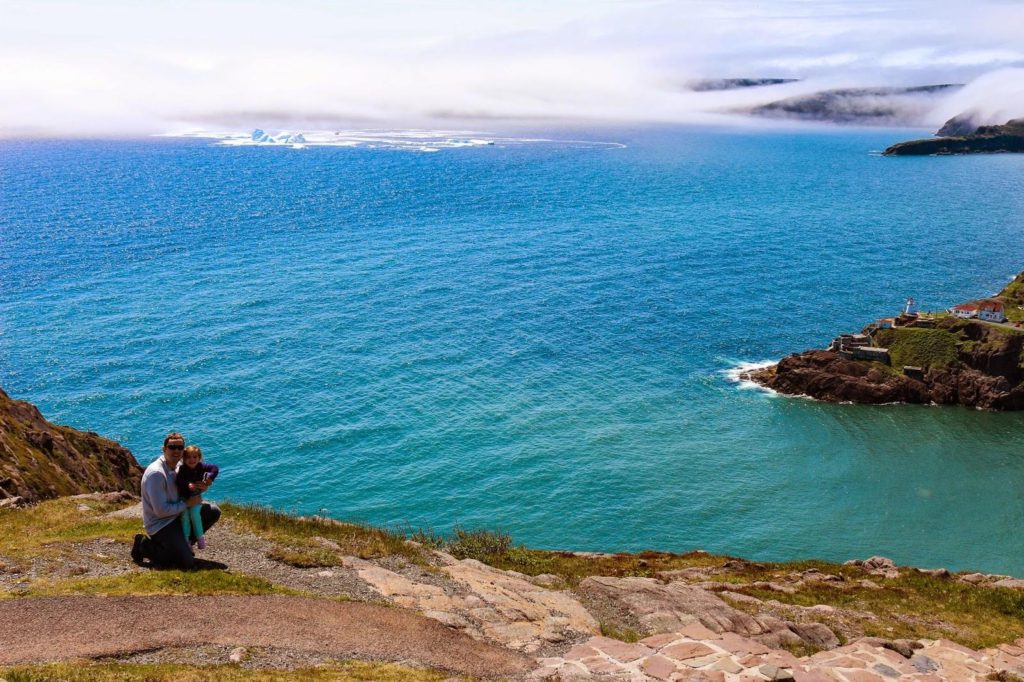 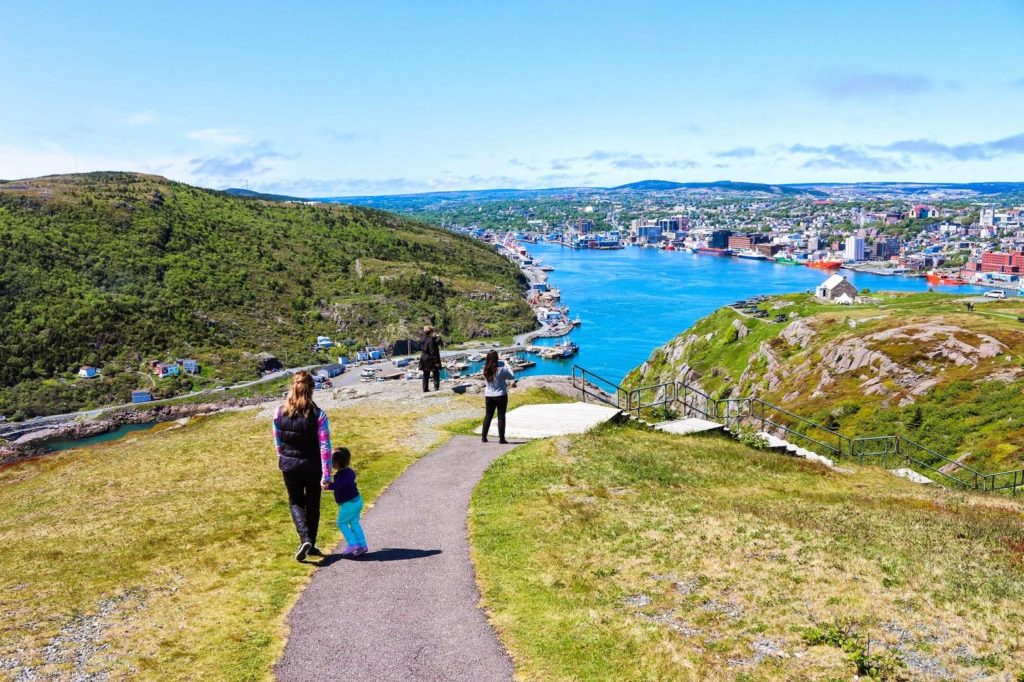 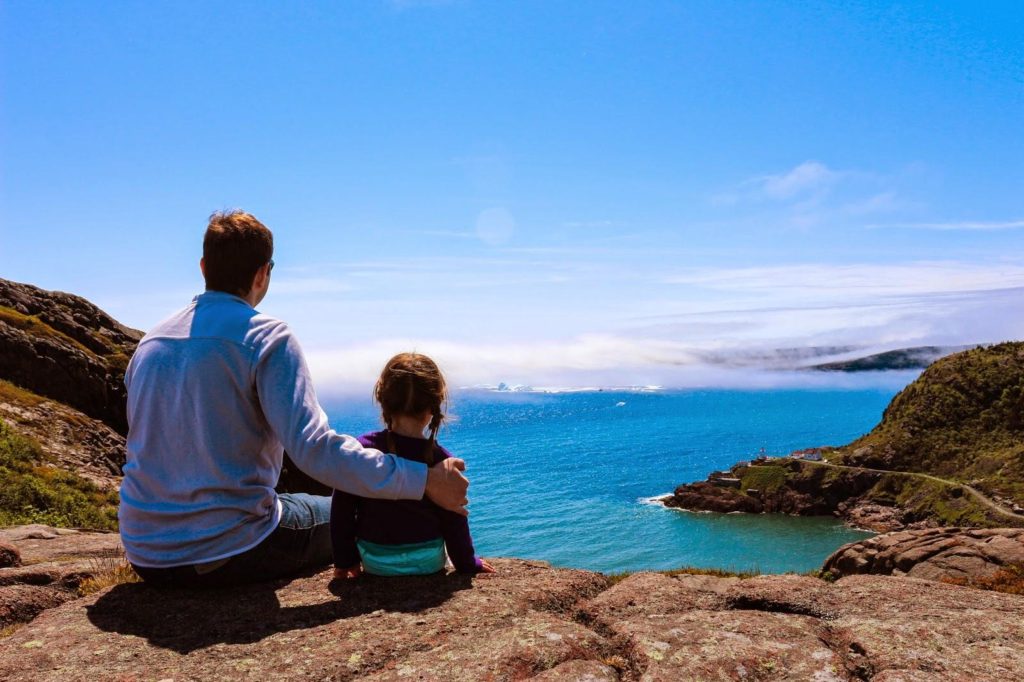 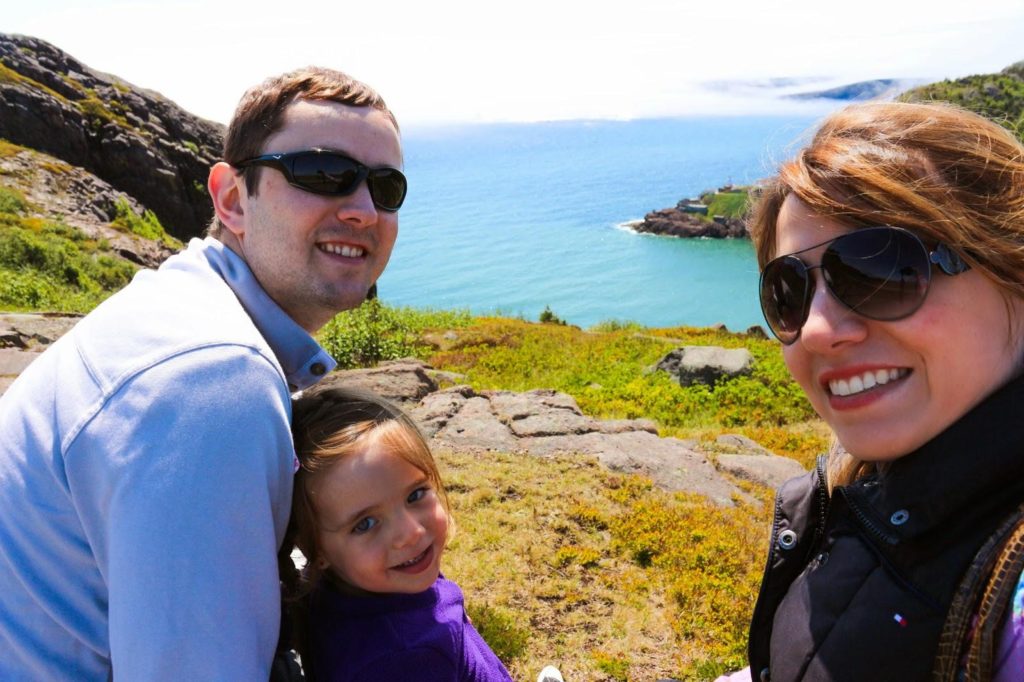 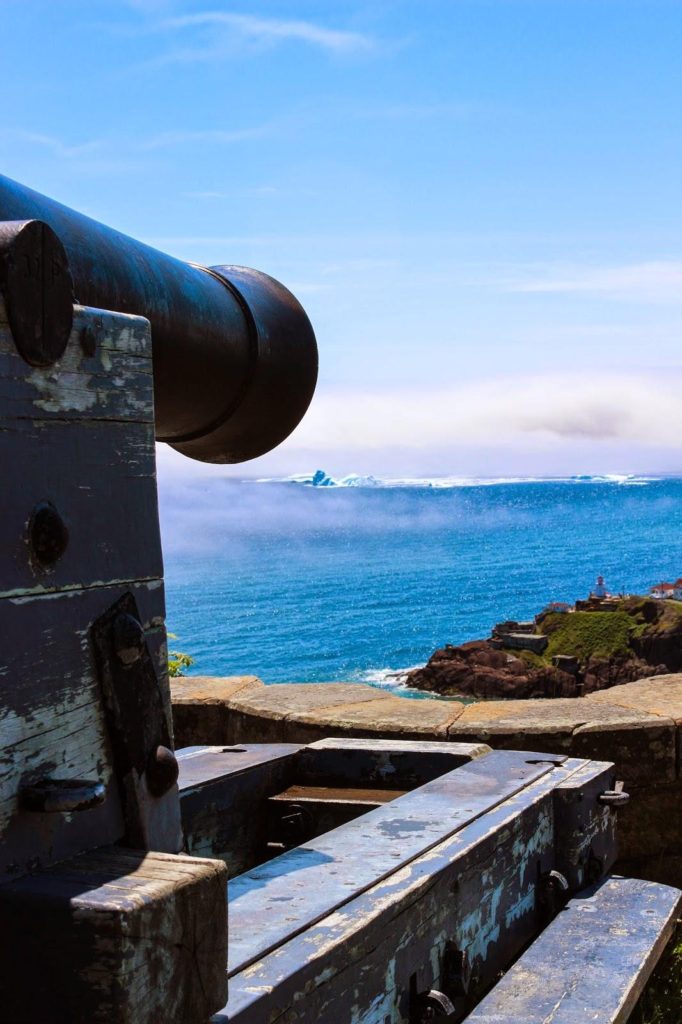 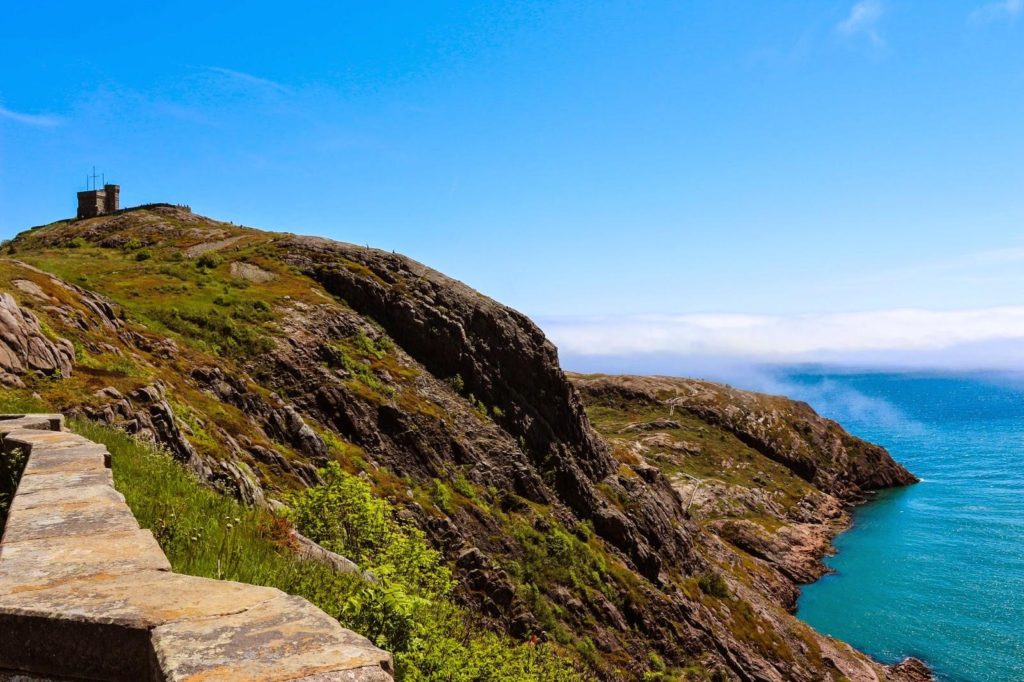 Right after the signal hill tour, we went down the slope, literally, and went to visit the Johnson Geo Centre, a geological center excavated on the hill, exposing inside, among other things, the real rocky mass under Signal Hill, which according to them, dates around 500 million years. 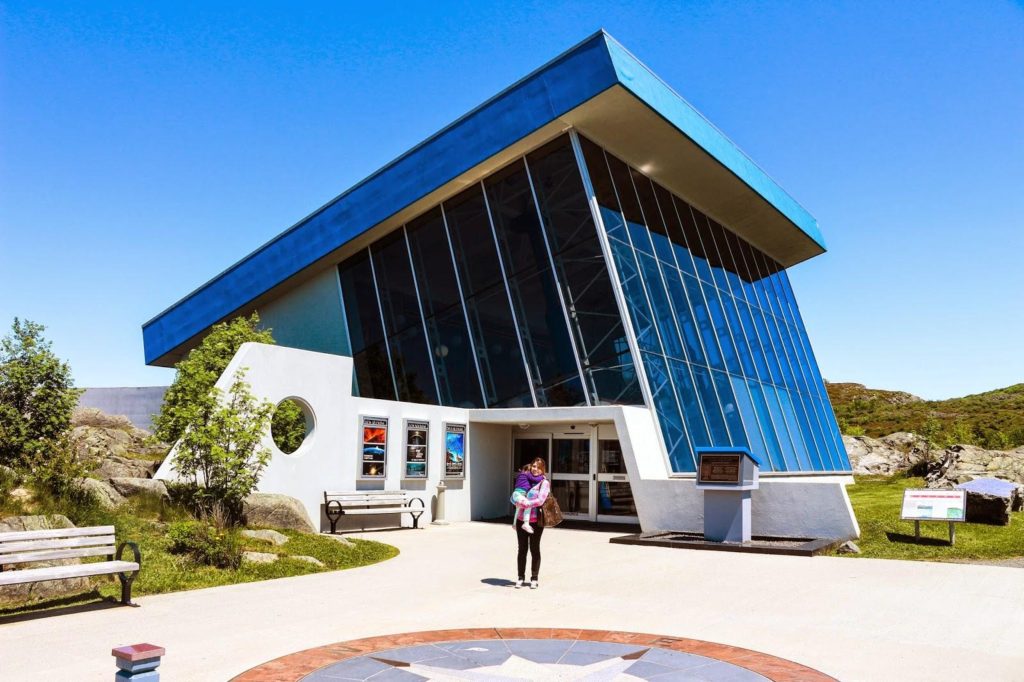 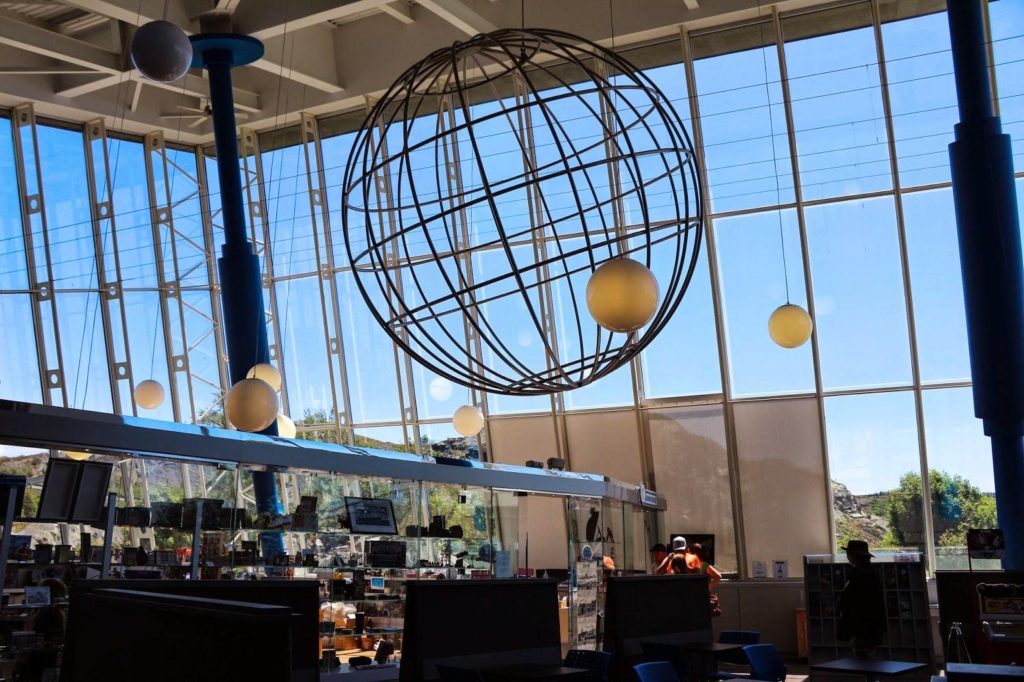 In the late afternoon we still went for a walk in Bowring Park and discovered a great playground for children, very large and full of options. Needless to say, Alice loved it. 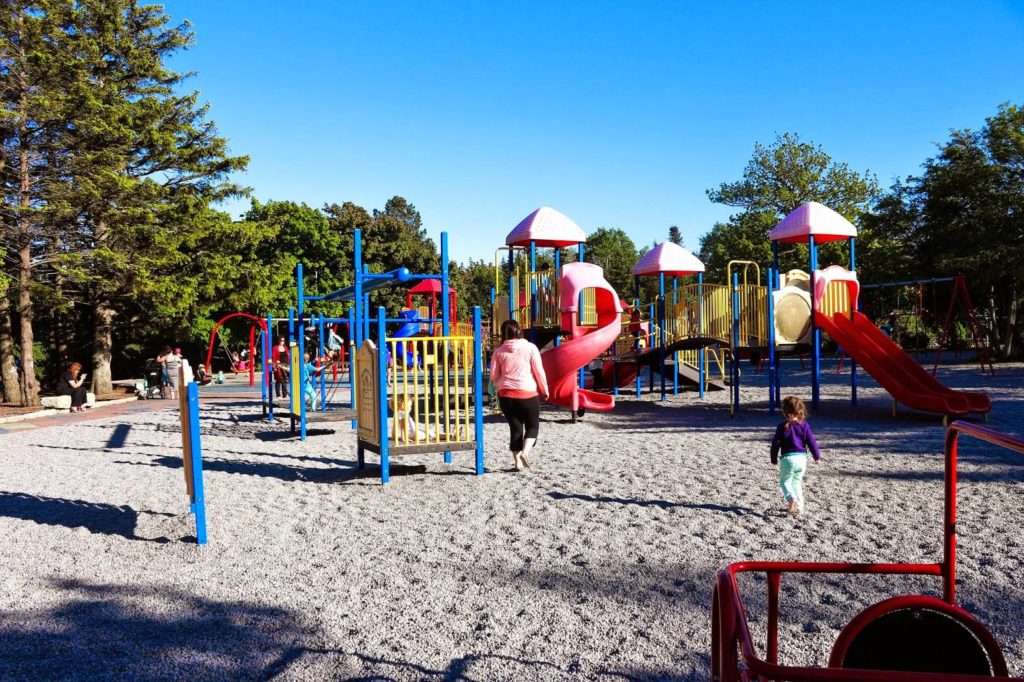 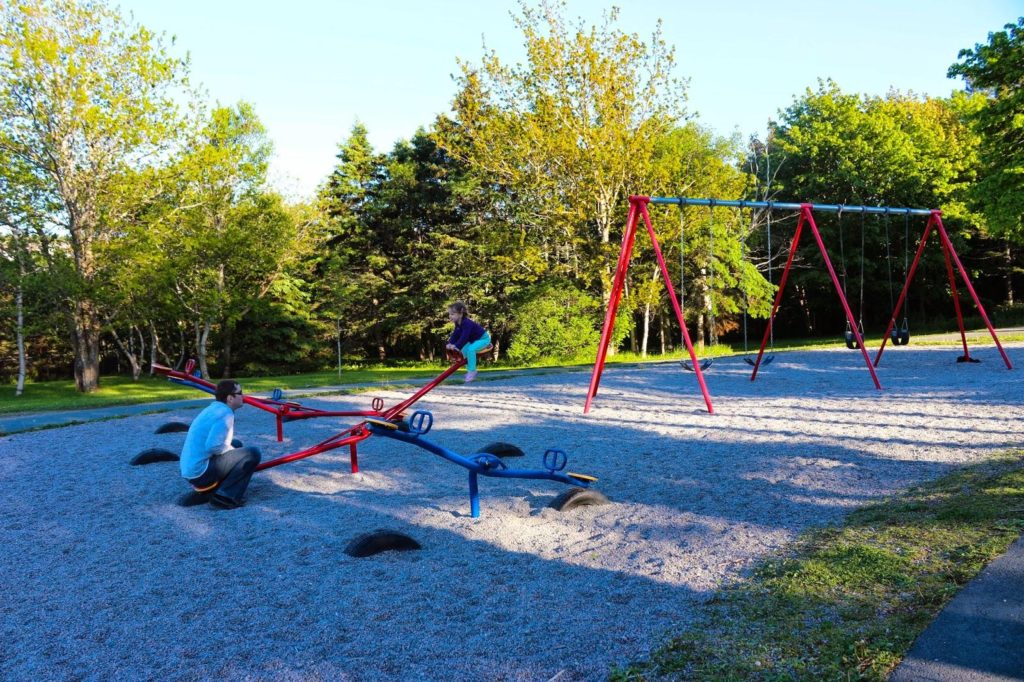