Our list of day 3 of visit to Barcelona – Spain is not even long, but we fill our eyes and hearts of tourists. For those who missed the first two days in Barcelona, here’s the 1st and 2nd.

Without a doubt, we work the calf of both walking, going up and down stairs and everything, on this third day. Everything was super intense and at the same time super Zen, because moments that we spent inside the beautiful work of Gaudi, Basilica de la Sagrada Familia, will never be forgotten.

Parc Güell was an adventure for us, since we weren’t on the inside that the arrival there was a little complicated, especially with children (I also don’t know if we took the hard way, but anyway). After climbing slopes, tightening on narrow escalators, climbing several flights of stairs with the cart and Alice in our arms, walking irregular paths, etc., we enter and walk a little through the area of monuments. At least until arriving at the entrance, we passed through areas with beautiful views of the city and softened our tiredness hehehe.

I must say then that despite appearing in some places of the web that the entrance is made through two of the iconic buildings of the park, in real life there is only the exit. The entrance is made by the opposite side and there yes, with not very “kid/stroller friendly” access.
Parc Güell also has online ticket sales and we bought it a few days before. The garden area is free for visitation, but what is even cooland more impressive is the area of the monuments, where entrance is charged. The grandeur and attention to detail impressed me a lot and certainly worth the visit.

Basilica of the Sagrada Familia

The church has an out of the ordinary energy, so penetrating and the grandeur and beauty impress, at least in my opinion. We will have to go back there other times for sure, even more in about 10 years, when they promise to finally finish the church, after more than 1 century of construction (which began in 1882).
The church has box office, but I strongly recommend the advance purchase, to avoid queues and possible overcrowding. The towers can also be visited, each with a separate ticket that I also recommend buying over the internet in advance, as tickets sell out quickly or are not even available on site. Only I climbed one of the towers (Torre da fachade del Nacimiento) and Diego stayed with the girls waiting, because they do not allow the climb with children (and I totally understand why – the ride is done by narrow corridors and the descent is done all by stairs , without protection on the inside).

One of Barcelona’s most important squares, the square was built at the time of the 1929 World’s Fair and is at the foot of Mont Juïc.

Getting there by Plaça de Espanya metro station is the best option to visit this beautiful area of Barcelona. Mont Juïc and its main building, the Palau Nacional, which now houses the Museo Nacional d’Art de Catalunya, was built for the 1929 international fair. We had the plan to stay until the end of the day and see the water show (magic fountain) that takes place right at the foot of the museum, but we found the place too empty for such and checking the web, we saw that there was no show that day. We were a little disappointed!
But although we did not enter the museum and did not see the light and water show, we walked a lot through the region, we walked through some of the important points, including the Olympic center, built in 1929, but used in the summer Olympics of 1992. Another great attraction, at least for me as an architect and fan of architect Santiago Calatrava, was to know the Torre de Comunicacions Mont Juïc, designed by him, also for the 1992 Olympics.
We left some points out, more for lack of energy even, since we had walked a lot that day. Nothing like leaving a few things to visit on an upcoming trip to Barcelona! 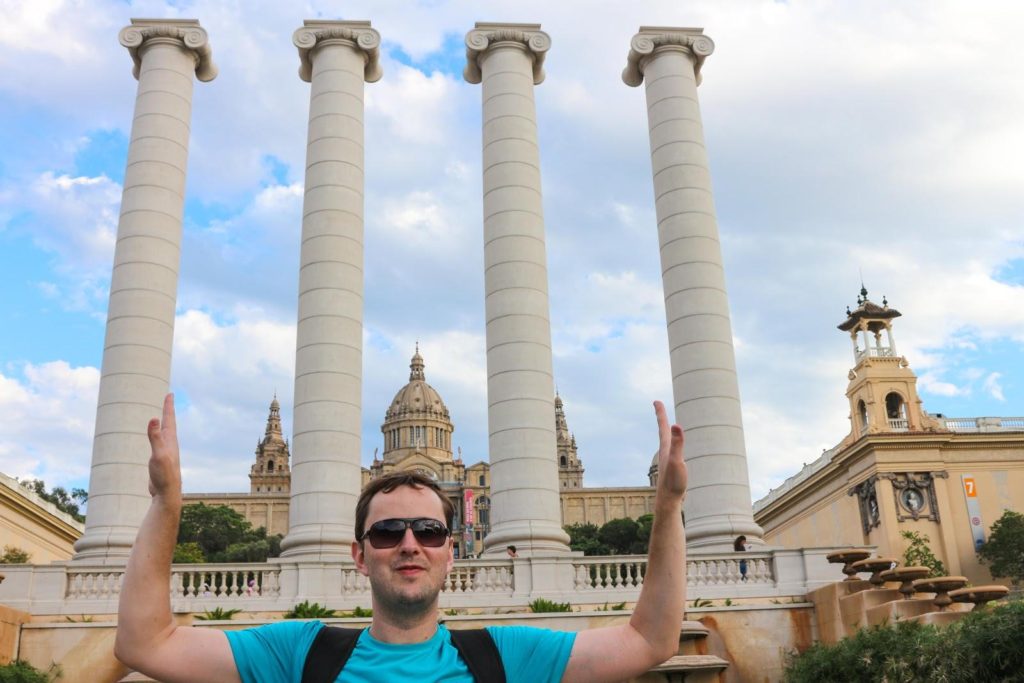 We managed to find long-time friends in Barcelona. They are gauchos too and today live in France. How good luck it was to have reconciled our visit and a trip of them to work and have spent a few hours catching up! We want it again!!

Where to stay in Barcelona?

Once again, we choose a hotel within the usual criteria, access to public transport, reviews and price. The Hotel Via Augusta was the one that best closed with our criteria, in the days that we would be in Barcelona. The metro station was super close and the hotel was located kind of at equal distances from various attractions that we had booked to know. The breakfast was on the side, but very neat. Recommend!