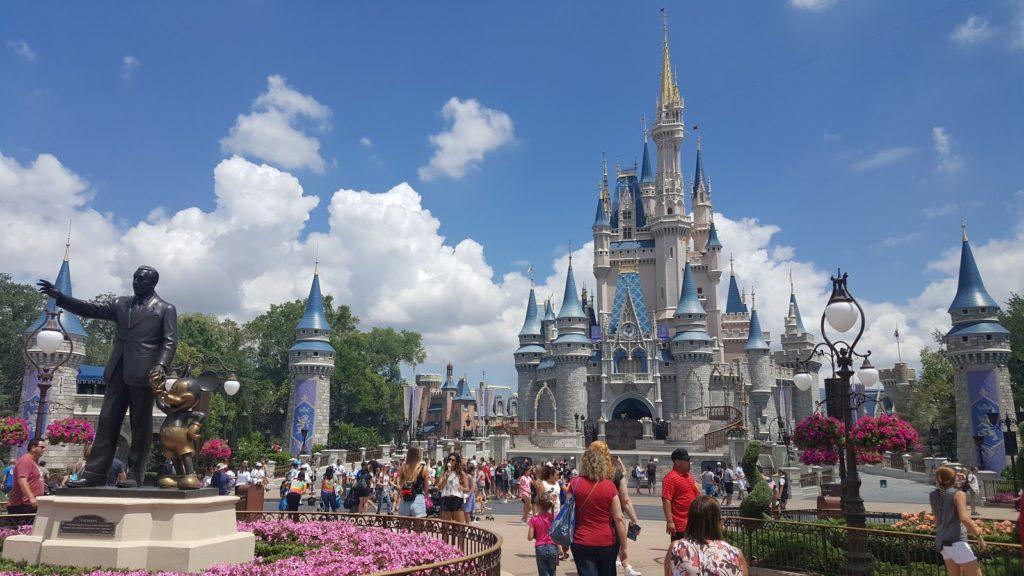 And here comes a flood of photos, get ready!

Disney’s most famous park is also one of the most photogenic and obviously most photographed places in the world. I decided not to take the official camera, more for the practicality of carrying something more compact, such as the phone, so many photos were taken. However, with the phone, the battery may not last all day and hence the question of recharging with portable charger or finding an outlet by the park (which is not feasible at all). I intend to take the camera like all previous trips, even if trambolhenta.

I’ll start by saying that I found it very crowded in the two days we were there – see our visit there in 2013 here. The truth is that I think the Magic Kingdom is never empty, but I found sometimes quite difficult to circulate inside, because of the amount of people themselves and carts.
We organized and booked the 3 fastpasses anticipated for activities within the park, all through the Disney Experience app (IOS and Android) and we were changing and reserving others as our day and our pace was developing.
Tips I would tell to those who are going to the Magic Kingdom:
Study the park well (in the app or map) and keep in mind the attractions that are priorities, the ones that would be cool to go and those that can be passed to a next opportunity if the queues are too long (and you can’t catch the fastpass).

My example is the Seven Dwarfs Mine Train, which is an average roller coaster where Alice could go and I had quite an interest as well. We just couldn’t get early fastpass and during the day, the queues were over an hour. Our rule is not to wait more than 30 min, so we were losing hope of going until Diego, who was subsequently checking the availability of fastpasses throughout the day, got one for the 3 of us there for the beginning of the night (and Didi stayed with Grandma waiting there f now) and we got our turn. It was well worth it, I loved it (but take care of the caps, Diego lost his with the shake / wind)!

We wanted to have lunch at Be Our Guest, the park’s new themed restaurant/castle, but we couldn’t book in advance. They accept some people at the time, but we didn’t have any luck either. We had lunch in one of the fast-food restaurants, you go to the counter, pay, take out your food and choose a table and it was the Pinocchio Village Haus that was full, but no endless queues – we got a table inside where there is air conditioning!!