One of the most common questions we get since we moving to Germany is about the language barrier. How are you guys moving to Germany without speaking German? So here in this post, I share some of our experiences in this “long” 6 month journey and insights about it.

Well, I must say that although it is our situation at the moment (not speaking German in Germany), we are not comfortable nor would recommend it. For those who have the time to learn the official language of wherever you are moving to, I strongly recommend.

Our preparation time before the big move to Germany was relatively short , so with our moving process, life with 3 kids, 2 dogs and everything that was running back in Canada, learning German took, naturally, the lowest priority in our list.

Even before coming, but specially now, we clearly see how much easier life would be if we did speak German. But since learning a new language (specially some of the hardest ones) is not a magic thing, we try to make the best of every day with what we have.

It probably goes without saying, but here we go: English is mandatory. At least from our point of view.

Most native Germans also speak English in a acceptable conversational level, so that make our live easier in countless situations, every single day!

One of the first things we had to deal with were all the documents and registrations. We tried to do as much online as we could, because translating text/emails in a computer is easier than understanding or talking in German, isn’t it?

When there was no other way, like in the residency visa process (Blaue Karte, in our case), we brought someone in who spoke German for us, as part of the relocation services we hired. In the driver’s license process, we rehearsed a few main phrases and words and used every will power to understand what the person said (it was hard), but we did it!

There was not a single day in this 6 months of life in Germany that I didn’t use a translation app or other website. Most often, I use Google Translate app on my phone.

I dig on the pronunciation option on the app because, gosh, some of the words and sentences can be pretty intense. Other feature that I love is the scan and live translation which you use your phone camera to point directly to the text (for grocery store products etc).

Of course, you don’t always get the best translation, some words come out of order, but you can definitely get the point or the main idea of a text or word.

Other great option is the app/webiste DeepL , which is another translator, but that promises a higher quality translation, especially for German. Diego uses that at work.

In the supermarket, pharmacy, doctor’s office etc, we try to understand what’s being said, but soon we let a “sorry” go and usually people tend to switch to English.

After that, I usually smile, apologize for not being able to speak German yet and tell that I’m learning. Those steps really help!

At the girl’s school, which is bilingual, quite a few teachers don’t speak German, so communication in English flows really well. Still, I try to greet some of the German teacher and other parents in German, with my extensive greetings vocabulary (ha!)

Not everyone agrees with this, but we are learning with the app Duolingo while we can’t take formal German learning classes. I know, they are essential.

But for now, Duolingo app keeps up with our daily vocabulary and grammar learning in a interactive and fast-paced way. It’s free (there’s a paid version, but I couldn’t see the advantages of it) and the interface is clean and easy.

Also there is a form of competition built in Duolingo, so it keeps the competitive individuals pretty obsessed (right Diego?!).

Other app/tool we have been using is Rosetta Stone , which is paid. For now, it’s a bit too slow for our pace and it’s been forgotten at the moment, but it’s rated one of the best online learning tools out there.

Well, when I have more updates I’ll sure come back to chat more. Let me know if you have any questions.

Meanwhile, how do YOU learn the new language at your new Expat home?

Moving day | from Gatineau to Ottawa 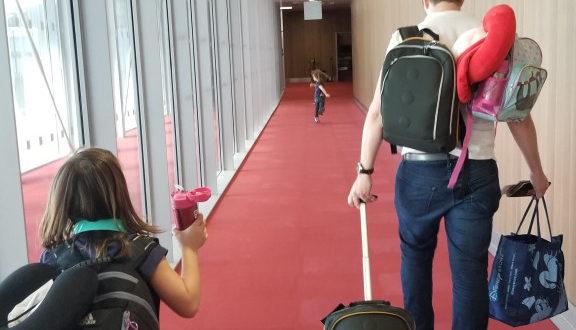 Health system in Germany | A summary